We started with an introductory piece about Resilience and the use of Cognitive Behavioural Therapy (CBT) and Acceptance and Commitment Therapy (ACT). Earlier this year I took part in a four week course on Resilience and found it very helpful. Many of the ideas used in the course I attended were based on CBT & ACT. I asked the group if any of them might have been affected by anxiety, depression and/or stress – they said yes, so I used the linked notes here by way of an introduction to Resilience. I particularly associated with the bus analogy. 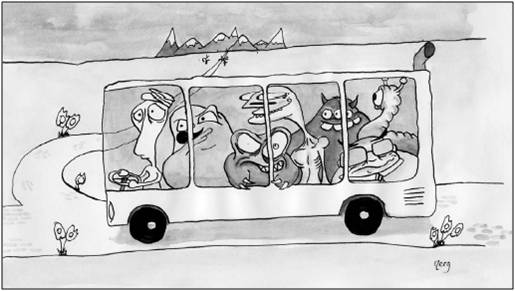 We shall revisit some of the helpful exercises and analogies in later sessions.

A new member of the group told us about the issues she has been trying to resolve, trying to help and support the needs of her mum with dementia – who is in denial, and their primary carer – her brother – who is also in denial. Her story had several similarities to the issues faced by another, long term, member of the group. Our new member had been doing her upmost, with the support of the doctor, but facing a brick wall. As she put it “I feel like I’m on the beach with my feet in concrete, watching my mum drowning in the sea”. The group was very supportive, as ever. They offered suggestions based on tactics that had worked for them, while recognising – you can only do your best. It was great to see people who had joined the group in a very difficult place now being in a position to help others. Our long term member said to me at the end of the session that she was now aware of how far she had come and how much she had achieved, for her mum, when at first she considered the problems she was facing were beyond her abilities to cope. Her mum is now content and safe in a care home, where her daughter can enjoy her visits. Separately, I also provided the linked information from the Alzheimer’s Society here about people with dementia being in denial to the new carer.

Unexpected developments with loved ones

A member said that his dad had suddenly become more lucid, following some hospital treatment. This was good in that he could make some contact with his dad, but it was challenging as his dad asked repeatedly where his wife was (she died three years ago).

Another member said that her husband had a “girlfriend” in his care home. He sometimes thought his wife was his mother. She was happy that he had found a friend, but said the situation was a little unsettling when the three of them were together.

There was another example of a mum who had become friendly with another person in her care home. For a frail old lady, her vice like grip had proved rather too much for her new friend causing bruises and a carer stepped-in to free her. They are now being monitored by the carers.

Those in the group who have loved ones in care homes often say they feel guilt about putting them in the home (however beneficial and supportive it is). They visit the home as often as they can manage. One member said that her mum purely lives in the present – when she visits, her mum is pleased to see her and they get on well – when she leaves her mum forgets about her. So, while our member is constantly concerned about her mum, her mum is not concerned at all.

We had the latest instalment of another care home on-going saga. Following several issues with one particular member of staff there was a Safeguarding Meeting planned. This was in the same week as a review of Continuing Care Funding. Our group member was preparing for more extended discussions (one of her recent review meetings had lasted five hours). The group reminded her of the need to be fully prepared, have notes of previous meeting, take notes at these meetings, obtain copies of the care home documentation and take the opportunity to assertively push the agencies attending to do the best for her mum.

One carer was seeking recommendations for appropriate day care for his wife, who has young onset. He was considering The Meadows day centre, but had noticed on a visit that everyone was old and his wife would not be comfortable with that. It was suggested he could look at Time Court and we said we would speak to another carer who had found an alternative day centre, to find out where it was. It was agreed this was a difficult situation. In the past his wife had tried the young onset group at Age Exchange, but said she did not like it.

We had a recommendation for a jigsaw app for the iPad, called ‘Magic Jigsaw Puzzles’ which had been popular with one of our group’s loved one. It is free (with in-app purchases). We have not tried it, but the link is here.

As always it was a very productive meeting. The new member told us she had never been to a support group before but had found the meeting so beneficial and she would be back next time.